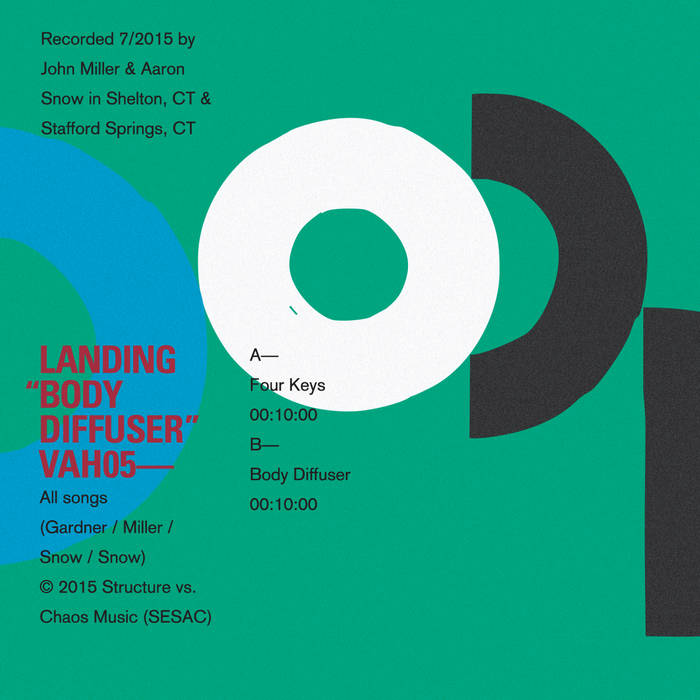 "Usually when a band/label tells me they don’t send out review copies I sorta chuckle to myself because almost no one doesn’t send out review copies in one form or another. But with Landing I think it’s actually true. They’ve got integrity to spare and their career, though already spanning more than a decade already, seems to be just getting started. I know that sounds crazy but Body Diffuser is partly to blame for my unbridled enthusiasm. It’s a whole new side of a band I already respected a great deal, almost along the lines of a release on Moon Glyph or Trensmat. It’s a psych brew of brews on Side B, soft like a low-power lightbulb that lasts into eternity. And I thought Brocade was bad-ass! (It is.) Happy to say I enjoy the vocals too. That can be a bitch. No one ever seems to be satisfied with vocals. Landing aren’t the kind of band that have ever relied on vocals in any way, so to hear them applied to such noble effect frees the spirit like a hearty wine (or at least I’m told; not a drinker, unfortunately, got a weak tummy). Side A is vocals-bereft and mellow almost to a fault, though that’s what a lot of the tape crowd get into these days and it’s a Landing staple. I prefer the striking, drastic measures taken on Side B (I’m being lazy here, the title is “Four Keys”), but if you’re a longtime Landing lemming the title track is going to boil your bunny the quickest, with those classic mellow guitar non-riffs and non-arpeggios, cosmic in a sense but less overt about its trippy side than most. Truly wandering desert music for the nomadic soul. Like The Octopus Project earlier this year, it’s encouraging to see a veteran band with undisputed credentials such as Landing choosing the tape route, though something tells me these tunes will hit vinyl before the year is through (fuck maybe I’ll do it if I come into some scrizzle). I can’t imagine Body Diffuser being available on a long-term basis, not at all, so if you like being the dude who has That Tape, the one few of us had the wherewithal to pluck from that sparkling distro in the sky (or, like, Tomentosa), don’t hesitate to pull the trigger." -Grant Purdum, Tinymixtapes

"Given the number of times Landing has tweaked and shifted its sound, the Connecticut-based band somehow manages to bring its brand of blissed out space-pop and droning etherealisms into better focus with each release. The band, which recently expanded to a quartet again with the inclusion of full-time drummer/multi-instrumentalist John Miller, now returns with a new, self-released EP, looking back to the layered, droning rock modes of its impeccable Gravitational IV and Brocade LPs. The EP’s title track unfurls its delayed meandering across an entire side of the tape, sprawling and filling every crevice of its 10-minute run in a slow burn of patient epiphanies. Directed by vocalist and guitarist Aaron Snow, the song’s video perpetuates Landing’s homemade vibes, having been recorded during the song’s recording sessions at the band’s home studio. Daron Gardner’s bass churns through air, providing the perfect compliment to Miller’s cymbal ride and Adrienne Snow’s celestial melody and levitating synth chords. It’s both classic and future Landing at the same time, and couldn’t sound better." -Bobby Power, Decoder Magazine